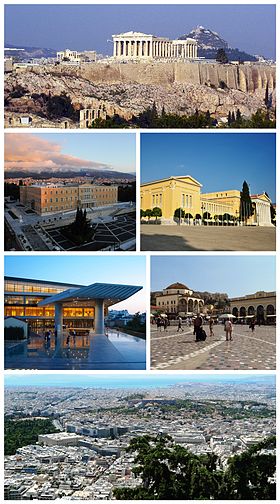 Attica region and is one of the world's oldest cities, with its recorded history spanning around 3,400 years.
Classical Athens, as a landlocked location was a powerful city-state that emerged in conjunction with the seagoing development of the port of

Piraeus .
A centre for the arts, learning and philosophy, home of

Aristotle s Lyceum , it is widely referred to as the cradle of Western civilization and the birthplace of democracy, largely due to the impact of its cultural and political achievements during the 5th and 4th centuries BC on the rest of the then known European continent. Today a cosmopolitan metropolis, modern Athens is central to economic, financial, industrial, political and cultural life in Greece.
In 2012, Athens was ranked the world's 39th richest city by purchasing power and the 77th most expensive in a UBS study.
The City of Athens has a population of 664,046 (in 2011, 796,442 in 2004) within its administrative limits and a land area of 39 km2 (15 sq mi).
The urban area of Athens (Greater Athens and Greater Piraeus) extends beyond its administrative municipal (City) limits, with a population of 3,074,160 (in 2011) over an area of 412 km2 (159 sq mi).
According to Eurostat in 2004, the Athens Larger Urban Zone (LUZ) was the 7th most populous LUZ in the European Union (the 5th most populous capital city of the EU), with a population of 4,013,368.
Athens is also the southernmost capital on the European mainland.

Useful Links and Informations about Athens