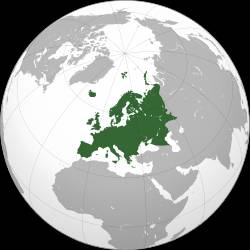 Europe is a continent that comprises the westernmost peninsula of Eurasia.
It is generally divided from Asia by the watershed divides of the Ural and Caucasus Mountains, the Ural River, the Caspian and Black Seas, and the Bosporus waterway connecting the Black and Aegean Seas.
Europe is bordered by the Arctic Ocean to the north, the Atlantic Ocean to the west, the Mediterranean Sea to the south, and the Black Sea and its connected waterways to the southeast.
Yet the borders of Europe—a concept dating back to classical antiquity—are arbitrary, as the primarily physiographic term "continent" also incorporates cultural and political elements.
Europe is the world's second-smallest continent by surface area, covering about 10,180,000 square kilometres (3,930,000 sq mi) or 2% of the Earth's surface and about 6.8% of its land area.
Of Europe's approximately 50 countries, Russia is by far the largest by both area and population, taking up 40% of the continent (although the country has territory in both Europe and Asia), while Vatican City is the smallest.
Europe is the third-most populous continent after Asia and Africa, with a population of 739–743 million or about 11% of the world's population.
The most commonly used currency is the euro.

Useful Links and Informations about Europe